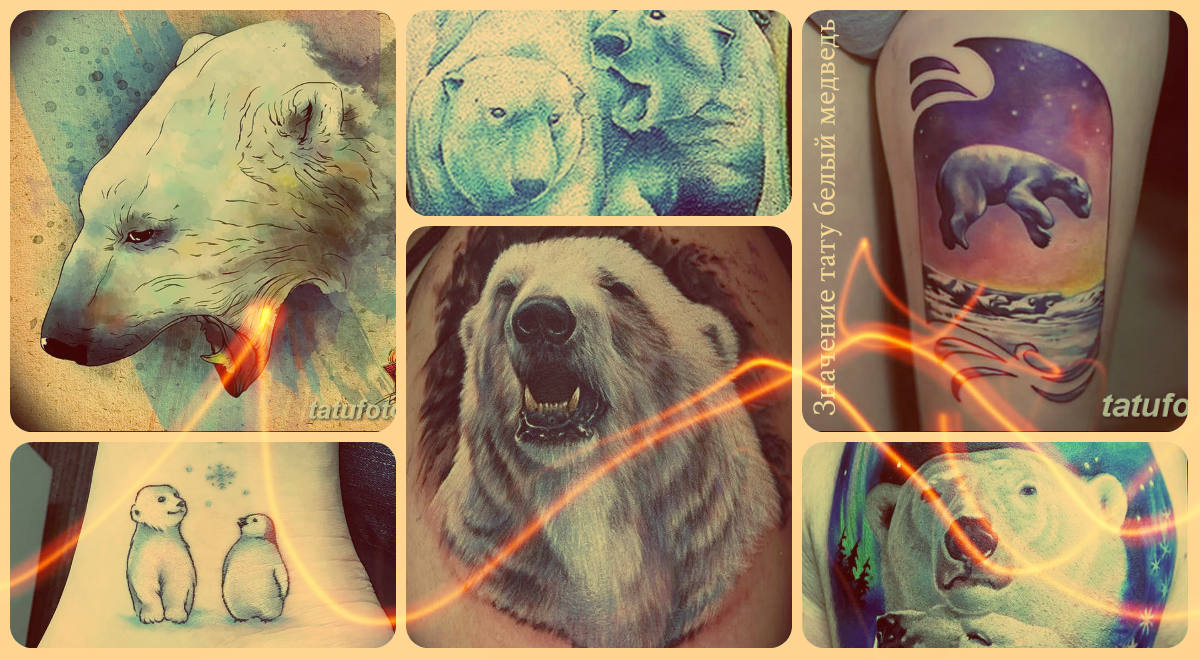 This material will reveal the meaning of a tattoo depicting a polar bear, possible options for the image of a predator, where and when it is depicted.

The history of the bear tattoo

The very image of a bear is very popular among many peoples. People worshiped the power and strength of this animal. It is no secret that the bear has no natural opponents in the animal kingdom. For each nation, the bear is the personification of certain qualities, but in general they intersect with each other. It is not surprising that the northern peoples living in the Arctic Circle praise this predator, finding a place for its prototype in local mythology..

There are several fundamentally different types of images of a bear: realistic and cartoon. The bear can be depicted alone, there can be a bear with a teddy bear, or only one cub. The predator can take any position, be in full growth, or only the upper part of the body will be visible. But sketches with a bear and a teddy bear, such a composition is often preferred by women. The bear can be depicted in any emotional state. So men prefer sketches in which the bear is depicted as angry, grinning, standing on its hind legs. Women, on the other hand, prefer images in a peaceful form..

A polar bear can be an independent character, but options for creating various expositions are possible, probably the most popular one is on an ice floe.

The meaning of the image of a polar bear

As mentioned above, the polar bear is a symbol of the northern peoples..

A realistic depiction of a predator in white color is preferred by people who are lonely, self-sufficient, such personalities by themselves. Having chosen this animal, a person seems to declare to the world that he is ready to live by his own rules, destroying all obstacles in his path. A person remains independent, no matter what.

The bear can be portrayed as a cartoon character such as Umka. But it rather speaks of a person’s unwillingness to part with childhood, his desire to preserve pleasant memories from him..

The image of a polar bear cub can be regarded as a symbol of helplessness and insolvency – this option is preferred by girls.

As a rule, women who already have children prefer their attention to the image of a bear with a bear cub. In this case, a parallel is drawn between the picture and the mother, which protects and carefully loves her child..

An interesting fact is that the symbol of the Northern Fleet is the polar bear, the tattoo of which is common among the soldiers who served there..

Most often, the images of this wild beast are chosen by men. Any part of the body can be suitable for drawing, it all depends on the scale of the image and the idea: whether the animal will be depicted in full, or only the upper part of the body. Most commonly tattooed on the back, shoulder blades, shoulders, thighs, or upper chest.