Here you can find out all the most interesting about the meaning of the harlequin tattoo, see photo examples of tattoo designs, learn about their history and meaning. On the site you can choose the basis for a future tattoo by referring to our catalog: 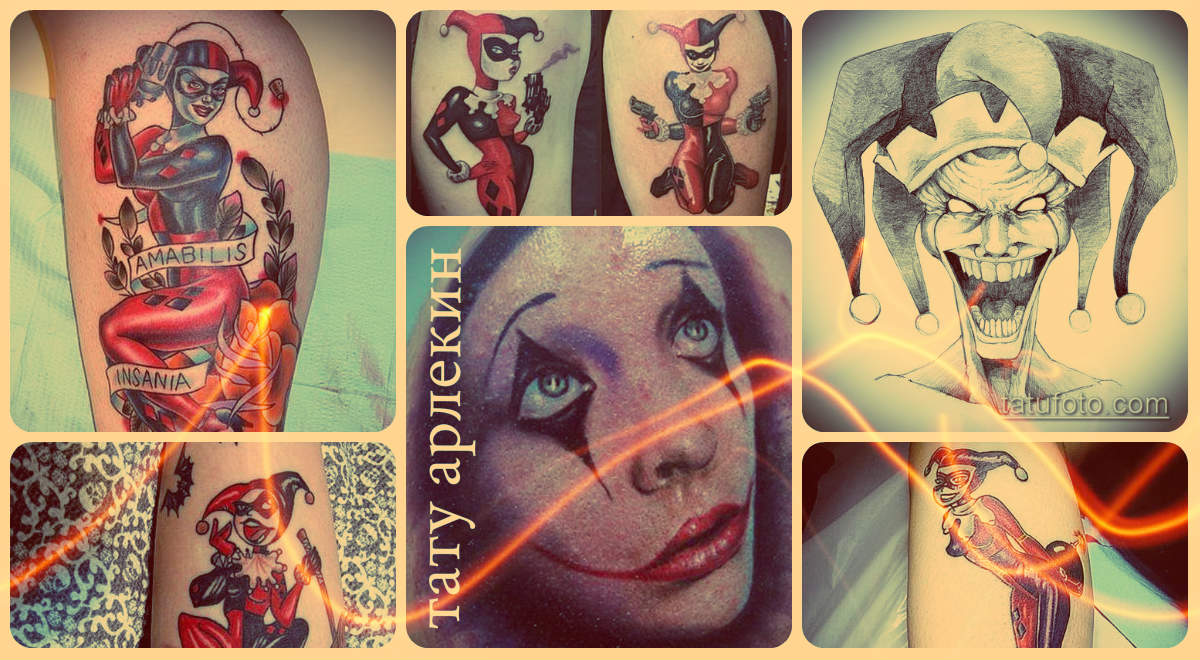 The meaning of the harlequin tattoo – photo examples of drawings

Interesting facts about the meaning of the harlequin tattoo

The image of the Harlequin, jester, clown, clown is quite popular among tattoo lovers..

The history of the image is associated with the hero of the Italian comedy-pantomime, where the Harlequin is an unlucky, cheerful servant who does not smart deeds and at the same time does not really worry about this. In The Divine Comedy, Dante Alighieri describes the Harlequin as one of the demons. But this image came to Europe from ancient Indian epics, the basis of tarot cards. In them, the Harlequin, the jester, is a symbol of idealism, the ability to wonder at life and surprise others. It symbolizes the beginning of a new round of life, the possibility of choosing any direction of movement, unexpected fateful events. It is a symbol of emptiness and the presence of open paths and opportunities. The choice of the direction of movement. Like a jug that was full and now empty – to be filled with new experiences again.

In the light of symbolism, the Harlequin image is twofold. On the one hand, this is a jester, a cheerful, reckless image, capable of laughing at himself. The image of a merry fellow, reminding that everything in life is transient and one should rejoice and smile at every moment of life. On the other hand, it is a smile of sarcasm that despises the vanity of the world and its strict rules. Looking from a height at people’s aspirations for success, their attempts to achieve goals.

Such a tattoo is chosen by people who know how to make fun of themselves and others, easy to communicate, patient, but at the same time cunning.

The Harlequin is a catchy and bright character, therefore, the location of the tattoo should be in a visible place for others. Although tattoos are also performed in black and white, bright colors and colorful masks are still preferable..

Harlequin with a sad face is chosen by people slightly disappointed in the modern world order. Those who are sure that everything is predetermined in the future and we can only watch the course of life from the outside. Most often pessimists, but still have not lost the desire to please the world.

This symbol is loved by gamblers, junkies and extreme sportsmen. As a symbol of the Joker, they are unpredictable, decisive, reckless and inclined to take risks. Laughing at fate, they go through life easily, accompanied by good luck, brave heroes. They meet the blows of fate not only with a smile, but mock her..

More often it is a masculine symbol. Girls use this symbol less often. The harlequin cannot be small – he needs an area and a crowd. Recognition, applause is needed, but what’s behind the mask? A dual symbol of buffoonery and sadness, faith in miracles and emptiness.

The evil grimace of the clown symbolizes anger, betrayal and hatred. The accompanying bloody symbols lend an ominous touch and dark mysticism. Such a tattoo can be inherent in a person who is fond of the practices of black magic, sinister currents of philosophical thought and a convinced supporter of the frailty of life..

When deciding to capture the Harlequin on your body, think about the duality of this symbol. On the one hand – fun and laughter, on the other – dark sarcasm. A mask that hides its true face, the real motives of its actions, hiding the deep essence of an unrecognized personality under a grimace of buffoonery.