Here you can get information about calla lily tattoo meaning, get acquainted with examples of drawings, learn interesting things about the meaning and history of tattooing. The site contains more drawings within the catalog: 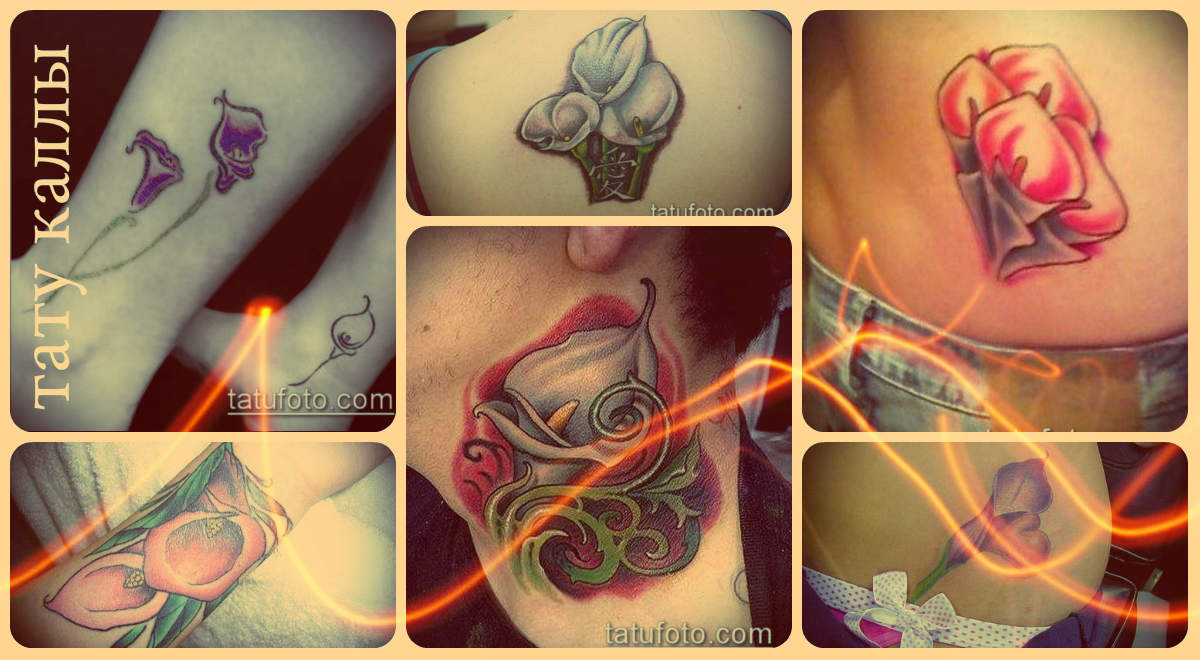 Interesting facts about the meaning of calla lilies tattoo

This beautiful flower is undeservedly considered a funeral flower. But the funeral one is the same as any other. Rather, at a funeral, the flower symbolizes hope for rebirth, purity and peace. In the Christian tradition, the calla flower symbolizes the trumpet of the herald, announcing the victory of spirit over matter. It is a symbol of resurrection, symbolizing the suffering of Christ. In painting and art, calla lilies were a symbol of the Virgin Mary, personified purity and holiness.

Translated from Greek, the name of the flower means beautiful and for good reason. Predominantly white flower, like a royal mantle, covers the golden mean.

The most famous legend among many tells about a girl whom the leader of another tribe decided to marry by force. Not resigning herself, she decided to throw herself into the fire, but the gods saved her, turning her into a flower. It is with this legend that the sacred meaning of calla lilies is associated, personifying innocence and purity..

Another legend tells about an Indian princess, the daughter of one of the gods. She fell in love with the young man, but her father was against their meetings and made her invisible. But the young man weaved a cape of flowers and so he could see his beloved. God the Father nevertheless took pity on the lovers, and these wonderful flowers formed from the fallen cape. The meaning of calla lilies is associated with this legend as a symbol of perseverance in achieving their happiness, giving strength and decisiveness to lovers..

Calla lilies flower is poisonous and in a magical sense protects from all the poison that is found in human life. The extract from their root was once used as an antidote for snake bites. The delicate vanilla aroma of a flower and its classical simplicity is a symbol of harmony and goodwill, expels despondency and gives hope for recovery to the sick, protects against backbiting and envy.

White calla lilies are a symbol of youth and innocence, they help to preserve the purity of thoughts and reveal the hidden potential of a person. They give strength to overcome adversity and obstacles, achieve harmony with oneself and enter into a positive dialogue with others. A symbol of consistency and the desire to build relationships with loved ones. That is why calla lilies wedding bouquets are so popular. A tattoo with white calla lilies on the left hand will mean the desire for purity of thoughts and self-improvement, focus on the development of inner potential.

Red calla lilies are a symbol of femininity and disclosure of sexuality. A purely female tattoo, implying the fullness of the sensuality of her mistress. They help to reveal their potential, to let their surroundings see it. Get a tattoo with red calla lilies on the lower back – this will give strength in an extraordinary approach in communicating with the opposite sex. Such a tattoo on the left hand will mean determination in learning a new sexual experience. Striving to take as much of the world as possible.

Calla lilies as a talisman of family happiness will be a harmonious tattoo for a couple who have gone through some period of life together. As in the bride’s bouquet, they serve as symbols of the strength of bonds and a happy union. No wonder only these flowers can be given by a couple, such a bouquet is a symbol of a family – close-knit, strong and happy.